It may be a bit too late for some (sorry!), but here’s a reminder for early season grape disease management.

One of the diseases you need to consider soon after bud break is Phomopsis cane and leaf spot. It causes minor leaf spots, which are more evident to our eyes, but necrotic lesions cause more critical damage on shoots and rachis. It also causes berry rot; however, it is not common with wine grapes because of our spray programs.

Phomopsis spores can cause infection requires water, and Phomopsis spores can germinate in a relatively cooler environment (the upper 40s). This pathogen tends to produce spores in spring from previously infected canes and cordons. Thus, springtime rain events are ideal for the development of Phomopsis. It is vital to protect young tissues when they come out from the older canes and trunks because we do not have any curative fungicides against Phomopsis. This disease typically takes a while to establish in the vineyard. It may take 4-5 years for Phomopsis to become noticeable after you start a new vineyard. However, once established in a vineyard, it is difficult to get rid of this disease. The fungus survives in canes and trunks that were infected in previous years, and it can cause damage to cordons and trunks. In other words, this disease can cause long-term damage to cordons and trunks.

If rain events are coming into the picture after bud break, mancozeb (FRAC = M3, Penncozeb, Dithane, Manzate, etc.), Ziram (FRAC = M3), and captan (FRAC = M4) are useful protective materials against Phomopsis. Since shoots will proliferate quickly, you may need to spray several times against Phomopsis, depending on how much rain we receive. One or two applications, starting from 1-2 inch shoot length and repeated seven to ten days apart, are sufficient in a typical year. After that period, your downy mildew or black rot applications, which happen in the late spring, will cover Phomopsis.

QoI (FRAC = 11), such as Abound and Pristine, and SDHI (FRAC = 7), such as Luna Experience, Miravis, and Aprovia, are effective too. However, you probably don’t want to use them this early in the season because you will need these materials for the latter part of the season to control other diseases (e.g., ripe rot and bitter rot).

Materials for black rot and downy mildew are often effective against Phomopsis. Thus, the fungicide coverage for these diseases is also working as management of Phomopsis, especially later in the spring and early summer. Some cultivars, such as Viognier, Cabernet Sauvignon, and Seyval Blanc, are more susceptible to Phomopsis than the others.

The other disease that you may need to consider around this time of the year is anthracnose, which is more common with a certain hybrid species. Typical symptoms are black necrotic lesions on leaves, shoots, and fruits, and often, the black lesion has an ash-colored center, as if you burnt the leaf or shoot tissue with a cigarette. The management strategies will be similar to that of Phomopsis, and in addition to the list above, Topsin-M (FRAC = 1) is also known to be effective.

A dormant application of lime sulfur (10% in our study, or 1% with Sulforix) is effective against both Phomopsis and anthracnose. With the corrosiveness of lime sulfur, it is hard to justify the money and time, thus, the low rate of Sulforix is appealing to me. We found a fixed cupper to be ineffective. The dormant fungicide application can reduce Phomopsis to some extent; however, the application’s efficacy is not strong enough to allow you to skip any preventative fungicide applications to be sprayed soon after bud break. The dormant application knocks down spores produced on the infected canes, but it won’t protect new shoots. Therefore, you still need to protect your shoots when they emerge.

The dormant application is less likely very effective against downy or powdery because both are called polycyclic diseases with a rapid secondary cycle. Even if you can knock down the initial inoculum, they can rapidly produce the next round of spores, especially under favorable conditions. These pathogens’ winter survival structures are very tough, so I don’t think the dormant time fungicide application is the best approach. The dormant application of lime sulfur is used for ripe rot prevention in Japan. However, there are not much data to confirm whether the efficacy is valid or not. If you are interested, please let me know so that we can set up a trial. 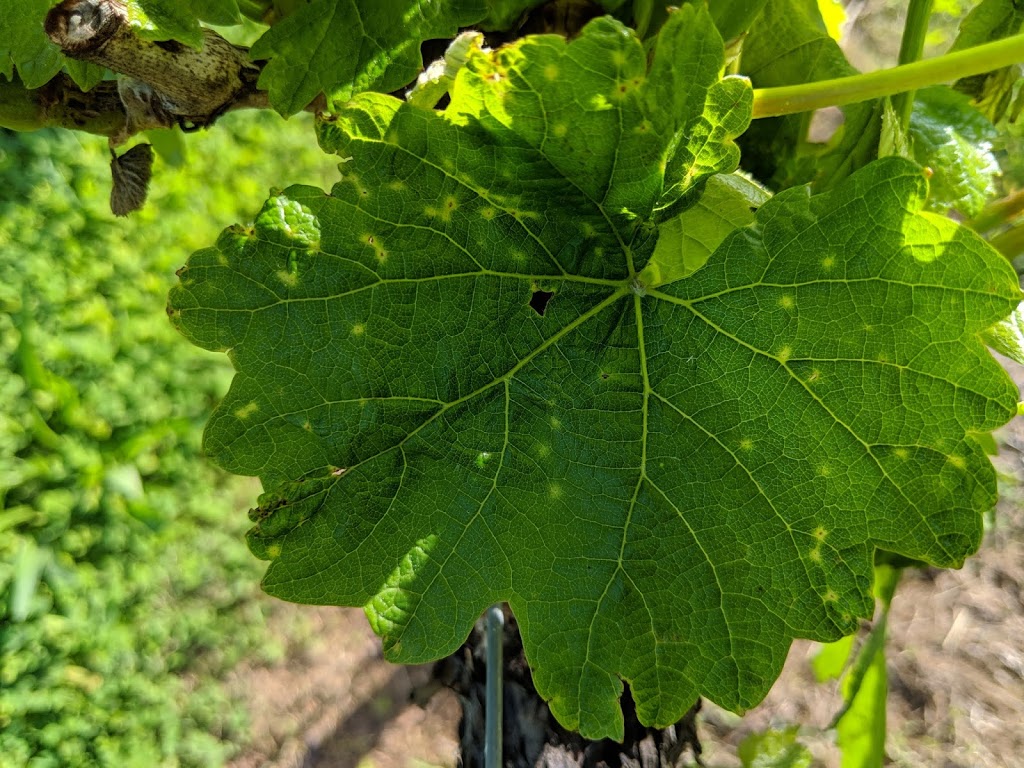